Post your upcoming fly-ins, pancake breakfasts and other events here!

Pilots, it's that time of year again. Come to the William T. Piper Memorial Airport, birthplace of the original sport airplane, for four days of activities. I will be presenting my annual FAA Wings Safety Seminar, "Stepping Up to Light Sport", Saturday morning June 22 at 10 AM in the first floor conference room, Piper Aviation Museum on the Southwest corner of the airport. You can sign up for Wings credit on faasafety.gov.

New this year in Hangar One on the airport's Northeast corner, free and open to the public, is my flight school's new Redbird Jay flight simulator. Special for Sentimental Journey is a simulated J3 Cub you can fly on wheels, skis, floats, or tundra tires.

Food, flying, forums, friends, flea market, flight simulator, and fun, so get the f to Lock Haven!
The opinions posted are those of one CFI, and do not necessarily represent the FAA or its lawyers.
Prof H Paul Shuch
PhD CFII DPE LSRM-A/GL/WS/PPC iRMT
AvSport LLC, KLHV
fly@AvSport.org
AvSport.org
facebook.com/SportFlying
SportPilotExaminer.US
Top

Great event! Weather providing, I will be flying up on the 20th!
Top

Great, Tim! I'll trade you a ride in my SportStar Max for one in your Carbon Cub. 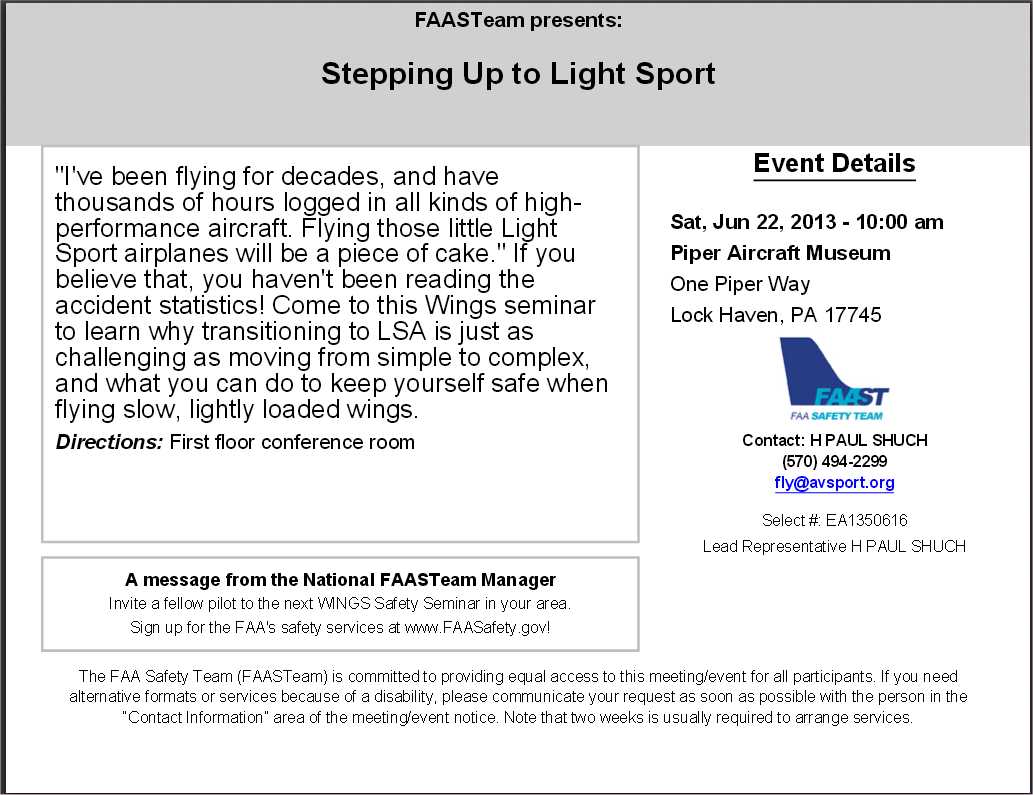 Limited to VFR, plans always have to be tentative, but...

...Karen and I are doing our best to make it to Lock Haven for the Sentimental Journey.

We have a sitter for the dogs, so weather permitting its on our schedule.

Finally get together with the Professor, plus we have friends near Lock Haven as well.

If anyone else is going, just look for the Sky Arrow - probably won't be many of them!
Fast Eddie B.
Sky Arrow 600 E-LSA • N467SA
CFI, CFII, CFIME
FastEddieB@mac.com
Top

Cool Eddie! Hope to meet up with you. I'll have a PiperSport or most likely a SportCruiser. Planning of the 20th.
Top

designrs wrote:Cool Eddie! Hope to meet up with you. I'll have a PiperSport or most likely a SportCruiser. Planning of the 20th.

I am planing on the 20th also, planning to be a flight of 2 along with David (PiperSport).

FastEddie, If you need a place to stay I am an hour SE from Lockhaven @ Limerick KPTW
Top

Weather is looking pretty good. Anybody know what's happening with the Sentimental Journey website? Or have a contact to those running the event to notify them? The website has been down for days.

I just spoke to the fly-in folks (their office is right next door to mine). They are aware, and they're pissed off at the ISP (who is in the process of transferring the site to another server. They've been at it for a week, and chose the absolute worst time of the year to migrate!)

You can email the fly-in office, j3cub@kcnet.org, if you need anything.

We have lots of early arrivals. A dozen planes on the field right now, half of which camped last night.
The opinions posted are those of one CFI, and do not necessarily represent the FAA or its lawyers.
Prof H Paul Shuch
PhD CFII DPE LSRM-A/GL/WS/PPC iRMT
AvSport LLC, KLHV
fly@AvSport.org
AvSport.org
facebook.com/SportFlying
SportPilotExaminer.US
Top

There will be a temporary tower (non-FAA) staffed intermittently on 122.8. Monitor and report your position. Calm wind runway is 27, R is paved, L is grass, both make RIGHT traffic, no simultaneous operations. (IOW, they share the same downwind). Expect numerous NORDO acft, so stay alert.

If winds are out of the east (rare), use rwys 9L (paved) or 9R ( grass), standard LEFT traffic. Field elevation is 556 MSL, normal pattern altitude is 1600 MSL, but Cubs often fly a lower pattern. Three quick clicks on 122.8 will sometimes bring up DigiWx. Five clicks to turn on runway lights and PAPI. The GPS approach from the East is straight in for 27, but minimums are rather high due to terrain.

There is a ridge a mile south of and parallel to the runways, peak at 1800 MSL (yes, that's higher than pattern altitude!), with antenna towers another 310 above that. If approaching from the South, cross the ridge at around 3000, overfly the runways at 2000, and drop down into the downwind. Or, fly out to the North at 3000, circle to lose altitude, and enter on the 45 at 1600.

It's not as bad as it sounds.

Thank you professor! Apparently all runways are usually left pattern except 27R which is right pattern. I assume that you are correct above and that the normal pattens are changed for the event? Interesting, no NOTAMS posted yet? Isn't the airport going to be temporarily closed for an airshow as well?
Top

designrs wrote:Apparently all runways are usually left pattern except 27R which is right pattern.

NO! 27L is also right pattern, and has been all along at KLHV (due to proximity of that ridgeline to the South). It's LEFT traffic only for runways 9R and 9L. This keeps everybody well clear of the ridge line to the South.

Isn't the airport going to be temporarily closed for an airshow as well?

Yes, airshows will be Wed 2-3 PM, Th 6-7 PM, F 4:30 - 5:30 PM, and Sat 3 - 4 PM. In addition, pattern will be full for short field competition Th 2 PM, spot landing contest Th 3:30 PM, and bomb drop contest F 3 PM. Should be notams out for those.
The opinions posted are those of one CFI, and do not necessarily represent the FAA or its lawyers.
Prof H Paul Shuch
PhD CFII DPE LSRM-A/GL/WS/PPC iRMT
AvSport LLC, KLHV
fly@AvSport.org
AvSport.org
facebook.com/SportFlying
SportPilotExaminer.US
Top
Post Reply
44 posts

Users browsing this forum: No registered users and 1 guest