Talk about airplanes! At last count, there are 39 (and growing) FAA certificated S-LSA (special light sport aircraft). These are factory-built ready to fly airplanes. If you can't afford a factory-built LSA, consider buying an E-LSA kit (experimental LSA - up to 99% complete).

ShawnM wrote:Also, flying around in Florida in the summers the storms can pop up in a second

True. Unfortunately ADS- B wx lags by several minutes, so it won't help you all that much with T-storm avoidance.

Oh, I dont need it for thunderstorm avoidance, I already avoid them.

I guess I should have also clarified that I mainly use it for METARS and not a radar image as I'm usually on the ground when there's a even a hint of a shower or storm as I am a fair weather flyer.

For the radar, I like that it gives me a good look ahead many, many miles away long before I get there. I have seen many FAA videos on in flight weather and how they lag and certainly dont use in flight weather as my go/no go decision maker while in the air. We can get passing showers at any given moment so it's just nice to know roughly where they.
Top

I was under the mistaken impression that the mandate included all but aircraft without an electrical system. Wrong. Many headaches and much discussion later, not to mention impending expense, this information came as some relief. Many in our EAA chapter had concerns, as not all of us possess the munificence to lay out thousands on request. And I'll bet some aviator out there, reading this forum, was not aware of these exceptions either. So, if meets your needs, go for it.
Top

I spoke to Cessna support today and they said to look at the service documents. I told them i check monthly and there is a SB that includes a LOA to install an ELT but no ADSB. I asked when it was coming. He didn’t know and put in a ticket under my name, number and airplane serial number. I’ll update when they get back with me.

To his knowledge no one has discussed it yet.
Top

After several weeks of not getting a reply to emails, I called Cessna last week again and actually spoke with someone. The service agent said that the upcoming service bulletin was being reviewed by the technical writers and would be available as soon as they finished. He did not have any details as to a time frame or the actual ADS-B solution.
Top

I felt like I was being given a runaround and didn't have much faith that I was being told the truth.

I had originally requested a LOA for GDL-82 and GDL-39 installs along with updating the G300 software to the latest G3X. I will also post if I get a definite soluton
Top

Ok the tech called me back and told me the same thing. The SB is in draft and will be published in time.
I believe him. Things take time to go through approvals.
Top

Only if the company is paranoid about product liability. Any company that smashes perfectly good aircraft instead of selling them probably is...
The opinions posted are those of one CFI, and do not necessarily represent the FAA or its lawyers.
Prof H Paul Shuch
PhD CFII DPE LSRM-A/GL/WS/PPC iRMT
AvSport LLC, KLHV
fly@AvSport.org
AvSport.org
facebook.com/SportFlying
SportPilotExaminer.US
Top

If they are paranoid then obviously they have good reasons to be so ... companies are generally good at not wasting their money or they don’t last.
Flying Sting S4 ( N184WA ) out of Illinois
Top

Well, it is mid 2019 and we still have not received permission from Cessna to modify the C162 by adding ADS-B Out and In. However, I did received a link that talks about an FAA Memo for orphaned aircraft, see below.

ADS-B out is need because my home airport is within the 30NM ring of a class B airspace. Experimental is out of the question and if Cessna won't stand up I hope this will get the job done. One thing to remember is that the equipment installed must be certified, See FAA for the approved ADS-B Equipment list. The Garmin GDL-82 with the GPS antenna is on the list.

Also, calling Garmin technical support about using the GDL 82 for the 162 is a waste of time, they will not talk to you if you do not have manufacturers approval to do the installation.

I will keep posting what I can find out to help the 200 plus 162s that might need ADS-B as well as the validity of the memo listed above.

drseti wrote:True. Unfortunately ADS- B wx lags by several minutes, so it won't help you all that much with T-storm avoidance.

I’ve heard NEXRAD-style radar described as a strategic resource, not a tactical one.

It can be helpful in avoiding general areas of buildups or precipitation, and so can be useful for establishing a route around such areas. In FL, these areas pop up most afternoons along one or both coasts.

One afternoon on the FL east coast: 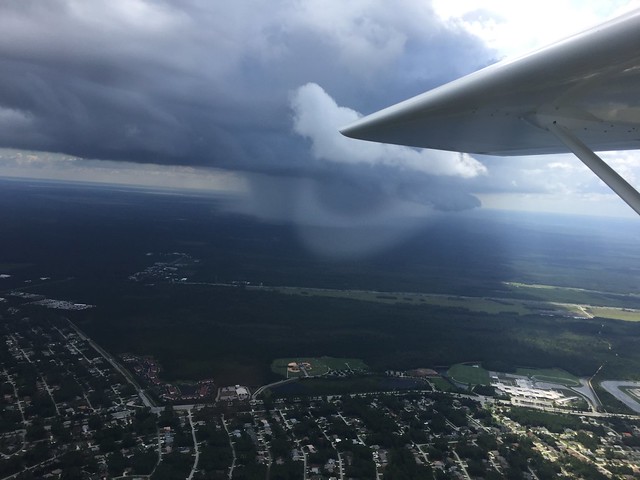 As displayed on the Garmin: 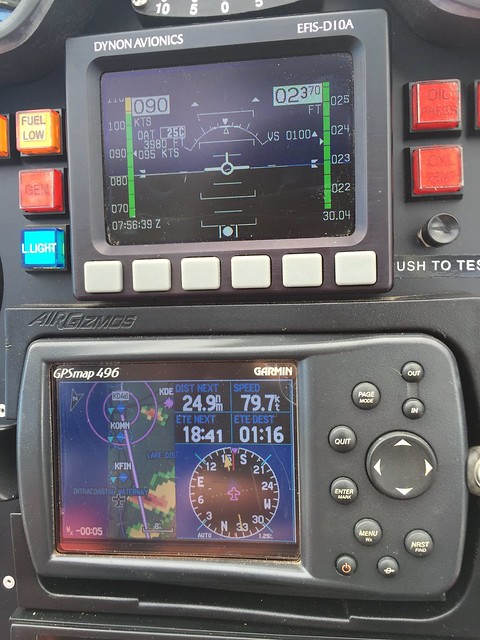 You can see I deviated to the east from my course line, though I could have just as easily done so visually.

But it can be deadly to try to use it tactically, to pick one’s was through an area or line of returns, due to the lag to which the professor alludes. Convective weather builds too rapidly and can move too fast for it to be any use, and that gap shown on the NEXRAD display may be long gone by the time you get there.

As an aside, I get NEXRAD returns most reliably via Sirius on my Garmin 496. It can also show on my iPhone in WingX, but that seems more dependent on cell coverage.
Fast Eddie B.
Sky Arrow 600 E-LSA • N467SA
CFI, CFII, CFIME
FastEddieB@mac.com
Top

RBearden56 wrote:I will keep posting what I can find out to help the 200 plus 162s that might need ADS-B as well as the validity of the memo listed above.

It's clear from the forum response that UAvionics doesn't understand that your query related to an SLSA. Their answer applies only to aircraft with a standard airworthiness certificate. Yes, for most aircraft an IA can do the installation, verify performance and non-interference, and file a Form 337 with the FAA. But 337s and STCs do not apply to SLSA or Experimental aircraft, which have special airworthiness certificates.
The opinions posted are those of one CFI, and do not necessarily represent the FAA or its lawyers.
Prof H Paul Shuch
PhD CFII DPE LSRM-A/GL/WS/PPC iRMT
AvSport LLC, KLHV
fly@AvSport.org
AvSport.org
facebook.com/SportFlying
SportPilotExaminer.US
Top

SB19-34-01 just released today: This service document provides parts and instructions to install a GPS antenna, L-Band transponder antenna, and a GDL 82 with associated wiring and cables to enable 978 MHz UAT ADS-B out.

The GDL-82 is a great solution for the ADS-B mandate. Great choice by Cessna. I've had mine installed for about a year and a half now and it has worked flawlessly. In fact I'm due to pull a quarterly PAPR report this weekend when I go flying.

Very easy to install with minimal wiring. Make sure you use RG-400 cable per Garmin if you are not already. I also installed the optional "anonymous" switch, "fail light" and upgraded my transponder antenna to the RAMI AV-74 blade antenna.

The GDL-82 is still $1795 and you'll need maybe $100 in antenna cable, antenna connectors and a few other miscellaneous parts. As for the install cost, that depends on who is doing the work. Mine was free as I installed it myself.

There are no more rebates to claim either.
Top

Well the link I posted from the Cessna Pilots Association was nothing more than wishful thinking by who ever wrote it. There are steps that can be taken for SLSA aircraft that are orphaned, experimental, or find an existing manufacture or organization that will support ongoing airworthiness for the aircraft. I am at a loss for for that last part. Hey EAA will ups be the orphaned light sport step parents? Cessna has issued the Service Bulletin for ADS-B out and I have a brand new GDL 82 in the box just waiting for the weekend when flying is not so good due to weather.

Now if they will add an ADS-B In using the GDL 39R that interfaces with the GDU 37X I would be set!

Users browsing this forum: No registered users and 3 guests